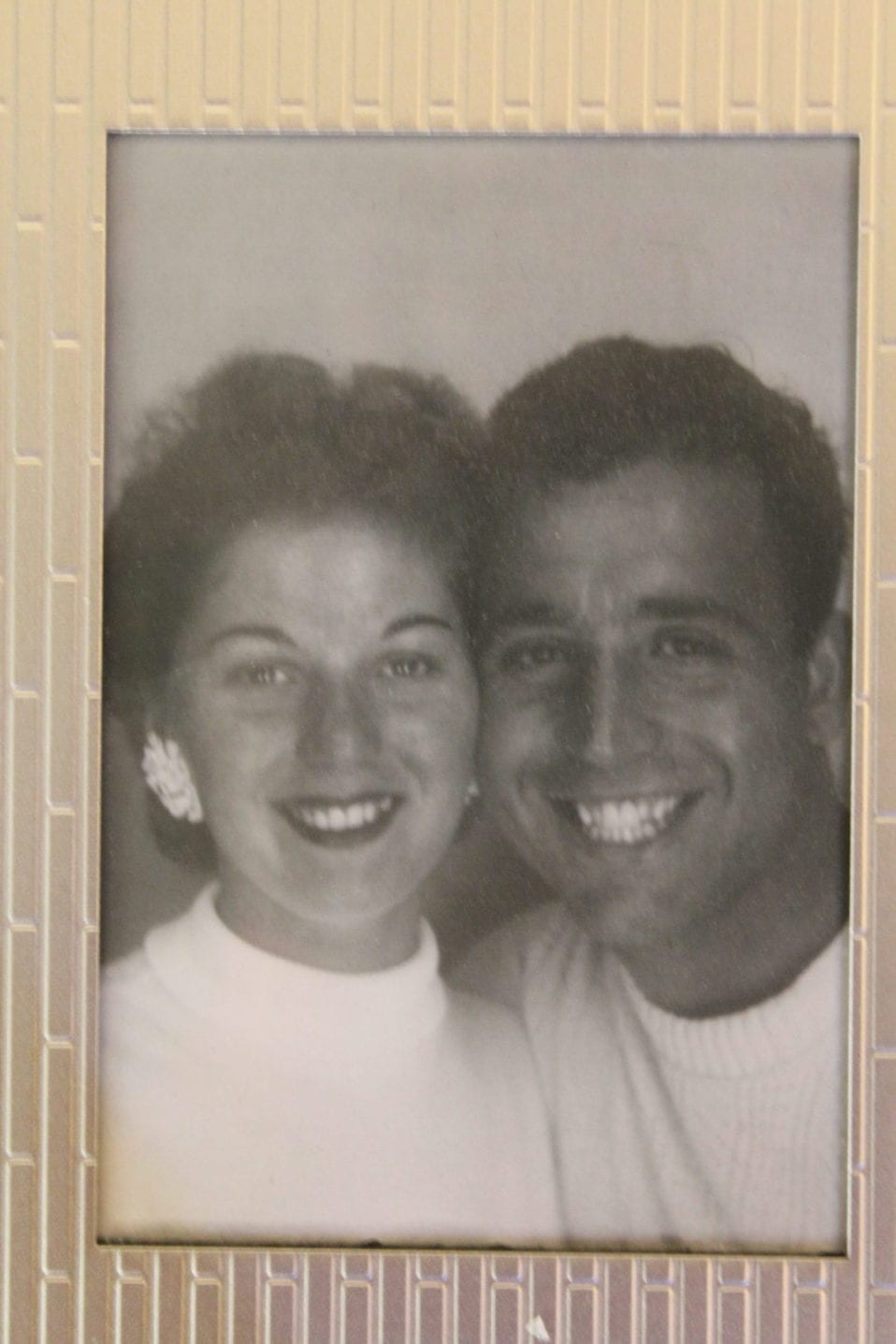 Steve Scribellito was on top of the world. It was a beautiful summer day in 1951. The only thing missing was a pretty girl sitting in the passenger seat of the secondhand 1939 Plymouth he had bought for himself. As fortune would have it, a couple of girls in capri pants strolled down the street up ahead. He pulled up alongside, noticing one girl had big metal curlers in her hair, covered with a kerchief. Even with her hair up like that, which had to be painful, she was a sight to behold. The other girl, it turned out, was a friend, and she introduced Steve to the pretty girl in the curlers.

Although Pat had just graduated high school, she knew a quality guy when she met one. That doesn’t mean it was love at first sight for her, although it was for Steve. After being formally introduced that day by their mutual friend, Steve and Pat began dating. Pat was just seventeen, and Steve was twenty. It took him awhile to win her over, as they dated for three years before getting engaged. It was another two years before they were married.

At the time of their marriage, Pat worked as an executive secretary at AT&T in New York City. Steve worked in a box factory. They moved in with Steve’s parents immediately after getting married. Soon, Pat was pregnant with their first child, and Pat and Steve moved into a rented apartment of their own in Jersey City. Their first son was born later that year, and Pat stayed home for a year before going back to work at AT&T after a leave of absence.

Not long after that, Steve changed jobs, and went to work in the printing division of the Reynolds Metals Company. They worked hard, saved up, and in 1962, the Scribellitos bought their first home, in the Country Village neighborhood of Jersey City. “It was a brand new house, and only cost $22,000,” Steve remembers. Imagine that!

In 1969, their second son was born, and soon after, with taxes on the rise, they decided to leave Jersey City. By that point, Steve was a salesman, so he was able to live anywhere, since his job required him to travel. They had friends in Toms River, and Steve had family in Beachwood. Their older son was getting ready to start high school, so they looked around and decided they wanted him to go to high school in Toms River.

At one time, Steve held down three sales jobs, and he was named Salesman of the Year. Yet, he laughs, “I can’t sell my wife anything!”

When they moved to Toms River, Pat stayed home with the kids. In 1982, when their younger son Dave was 13, Pat went back to work. As it turned out, one of Steve’s accounts, June Foods in Tinton Falls, was hiring, and they told Steve they had a job for Pat.

The Scribellitos’ life is filled with love and laughter. Their faith is very important to them, and they thank God for their health. Even more, they act on their love for each other daily. They say “I love you”, hold hands every night before they go to sleep, and they respect each other. According to Steve, Pat is a good woman, a great mother and a great wife. As for Pat, she could see early on that Steve would be a wonderful husband and father, and it has held true to this day.

Pat and Steve both retired in 1997, a few months apart. After all these years, Steve still misses the job he loved, and says, “I still dream about work.”

The Scribellitos live in a nice community now, where they golf, bowl, play bocce, and love to go to Broadway shows. Their favorite shows are Les Miserables, and Phantom of the Opera, both of which they’ve seen several times.

When they heard about Caregiver Volunteers of Central Jersey at their church shortly after Pat’s mother passed away, they found an avocation to fill the time they now had on their hands. Like salt and pepper, they do everything together, so they signed up in 2004 and now do evaluations for CVCJ. In the winter, when a lot of the volunteers go to Florida, Pat and Steve drive people to the doctor.

It’s important to them to keep people in their homes if it is possible, because some people just don’t belong anywhere else. And they realize how rough some people have it. “These people are inspirational,” Pat explains. “Most times they are younger than we are, and they have faced really hard times. A lot of the stories are so sad, and volunteering with CVCJ gives a lot of insight into what’s going on in the world. We know we’ve been blessed, and we gain a better understanding of what other people have to go through in life.”

“Sometimes,” Steve adds, “we get three calls a day. Other times, we don’t get any for awhile. I look at that as a good thing…that nobody needs our help. Pat worries it’s because not enough people know about CVCJ and its services.”

Your ticket for the: The Sunny Scribellitos