The Bride of Dracula Snags Her Clown 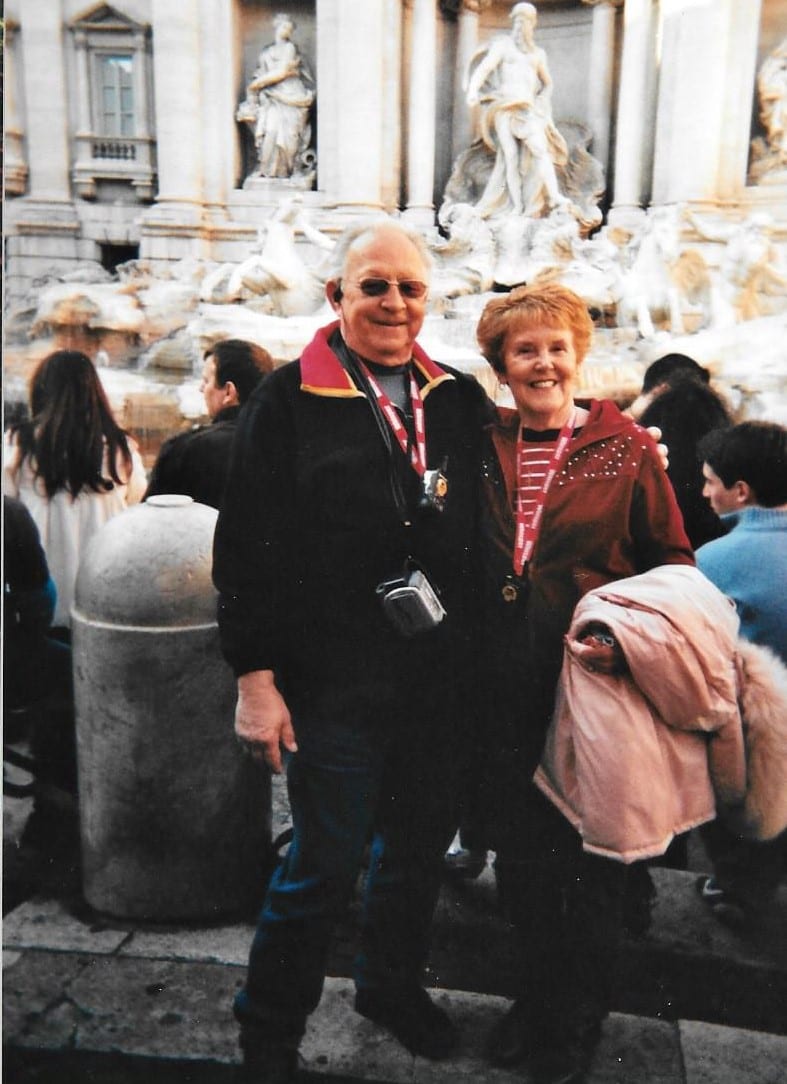 As a charter member of her church, one of Grace’s key jobs was to organize the social events held there. In October of 1982, she decided to have a singles party for Halloween. She asked one of her friends from the choir, Al, to help her plan it.

Grace’s husband had passed away earlier that year, and she was raising four children on her own. Al was separated from his wife. Although they hadn’t planned it that way, they were, as it turned out, both single. Their paths had intersected many times at the church, besides the choir. Al, along with Grace’s daughter, was the co-leader of the youth group. And when Grace’s son was 10, he, sadly, was hit by a car and killed. Al was his Sunday School teacher at the time.

The night of the party, Grace dressed up as the Bride of Dracula. “It was a horrible get-up, and if he was attracted to me when I looked like that, then it was good!” Grace says.

Al must have thought she looked okay, because, in his words, “I decided to start something, so I asked her if she knew how to dance. All I had to do was touch her hand, and I knew I was dead.”

As for Grace, she was attracted to Al because “he is a character!”

Five years after their first dance, on Halloween, they married. (In case you were wondering, she didn’t wear her Bride of Dracula outfit for the wedding.) Her children all knew Al because he was a big part of their church life, so it wasn’t a big adjustment for her family.

Outside of the church, Grace and Al have led full lives. For twenty-five years, Grace worked as an administrative secretary, then as head of the personnel department for the Toms River Schools, while raising her children. In 1998, she took early retirement, which, she says, turned out to be serendipitous. Three years later, she jumped in to care for one of her grandsons, who had developed leukemia. Her daughter had to keep working during that time because her husband’s job didn’t offer health benefits. Thankfully, her grandson survived that and a subsequent bout of leukemia and is now in college.

Al was a quality control engineer for a computer company, and supervisor of the inspection department. He was laid off on a Friday, and two days later his divorce from his first wife became final. He started his own business as a handyman, doing plumbing, electrical and carpentry work for twenty years until he semi-retired in his 70s. At 84, he still does a smattering of jobs for people who still call him, and as long as he can do them, he will.

If there’s anything talking to these two proves, it’s that you don’t have to slow down as you get older.

Life isn’t all work for the Jacobsens…to the contrary. They have many hobbies, from exercising for Grace, to making balloon animals for the kids at the church for Al. Every Palm Sunday, he makes roses, fish, and rings out of palm fronds. He makes 2000 rings every year for different churches, claiming it helps with his arthritis. He even had a Jewish friend ask him to make a Star of David, which Al gladly did, with a little effort!

Folding paper or making balloon animals is quite the party trick, but Al, being such a character, has one other trick up his sleeve. “So many children are afraid of clowns,” he begins. “So, I help to ease that fear by dressing up as one.” At the end of each school year, Al, who is known by all the kids because of his time volunteering at the church, brings a costume to the school and slowly begins to dress up as a clown, complete with make-up. Along the way, he periodically asks the kids, “Am I a clown?” The answer is always “no”, until he is completely in costume. Finally, in all his clownish glory, when he asks the children, “Am I a clown NOW?”, they all answer “YES!”. In this way, Al shows the kids that a clown is just a person in a costume and make-up, not something to be feared. It’s a brilliant strategy.

Days are busy for these two, who never seem to stop moving. They volunteer at Your Grandmother’s Cupboard, sorting clothing and delivering donations. They’ve bowled in a league for 10 or more years on Tuesday nights, and Al also bowls on Wednesday mornings. Social lunches and caring for their 11 grandchildren and 3 great-grandchildren get thrown into the works, as well. With a family of 27 and growing, there is always something going on.

As if all that wasn’t enough, there’s the travel. The Jacobsens have been on many cruises, to Alaska, the Mediterranean, a European River cruise, Bermuda. They’ve gone to Hawaii twice. Their favorite trip was to the Canary Islands. These two get around!

It’s actually amazing they have any time to volunteer with CVCJ, but they do!

A veteran of the Army, Al does veteran-to-veteran visits, while Grace is a Jill-Of-All-Trades. She does food shopping, drives CVCJ care receivers to the doctor, and now recruits for CVCJ. With such an active life, the flexibility of volunteering for the organization was a big draw for both of them. The rewards are great. As Grace says, “You meet a lot of interesting people. They are so appreciative of the things you do for them, but I get as much from helping them. It’s very gratifying to know that we can help ease somebody’s loneliness. We’ve been blessed with good health and abundant family, but that’s not the case for everybody.”

Last year, the Jacobsens celebrated their thirtieth wedding anniversary. So what makes the relationship between the Bride of Dracula and the Clown work? “No arguments,” according to Al.

Grace adds, “We’ve had a couple of disagreements that last 5 minutes and then we move on. We don’t hold grudges. We respect each other and haven’t tried to change each other. We accept each other for who we are with all our flaws.”

Your ticket for the: The Bride of Dracula Snags Her Clown

The Bride of Dracula Snags Her Clown