The Adkinsons – Their Glass is Always Full 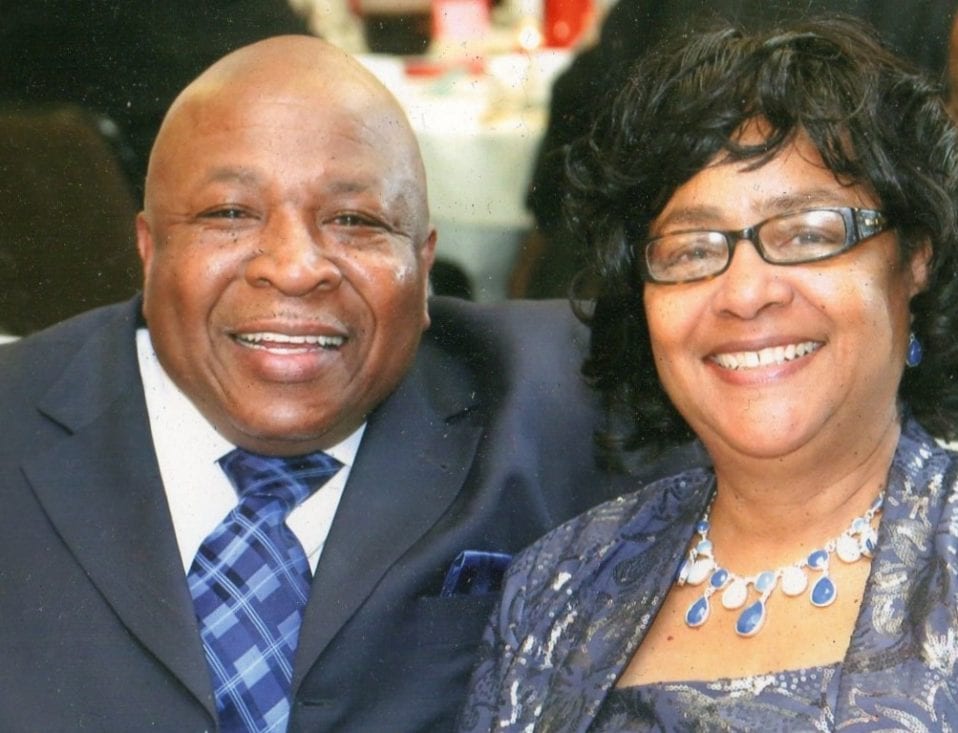 “When are you taking me to dinner?” was the teasing question Gloria would ask Elton whenever she ran into her friend from her youth. It took Elton awhile to bite.

Gloria and Elton had a long history, going all the way back to middle school when Elton had moved to Lakewood. Good friends all through high school even though Elton was a year older than Gloria, they went to Elton’s junior prom together. Elton always had something more than friendship in mind, but Gloria overlooked him. Upon graduation, they both went their own ways.

Elton worked, eventually becoming a corrections officer in Trenton. Gloria went to college and became a teacher. They each married other people, had families, and they each lost their first spouse at around the same time.

In July of 2008, they still ran in the same circles, so when Elton agreed to host a mutual friend’s birthday party at his home so guests could enjoy his swimming pool, it wasn’t surprising that Gloria attended. What was surprising was that, after the years of teasing from Gloria, Elton finally did ask her to dinner…at his house.

According to Gloria, Elton made a lovely dinner of grilled salmon. What wasn’t so lovely was her reaction to the meal…her face swelled up. Elton ended up taking her to the hospital, where it was determined Gloria was having an allergic reaction. They gave her a shot and the swelling came down. Elton stayed with her and offered her moral support through the whole ordeal. Later, she went to an allergist, who determined she was allergic to shellfish and possibly other fish as well.
They continued to date after that, and Elton continued to cook for her, but he stayed away from seafood!

In November of that year, Elton proposed. Or, maybe not. What he actually said, according to Gloria, was, “So what kind of wedding would you like?” Answering his own question, he said, “Let’s do it up!”. They went to the jeweler to pick out her ring, and the next May they said “I do” in front of 375 of their friends and family.

Retirement has only freed them up to put their energies into their communities. They are both involved in the Lakewood chapter of the NAACP, where they attend several events throughout the year. Elton is the president on the Board of Directors for the Greenwood Cemetery in Lakewood, which marks its centennial at the end of May. Gloria is also on the Board, and they are planning a celebration. They work to preserve the cemetery and honor the families that founded it.

The Adkinsons were instrumental in planning a community event, “What Happens Now?”. This event drew together lawyers, funeral directors, law enforcement and others to talk about what to do when someone passes away.

Socially, Gloria bowls and, since they live in a retirement community, they take advantage of some of the social activities that offers, including card night. Gloria is learning to play Mah Jong. They also spend a lot of time with their grandchildren, supporting them at various events. Elton is a member of the Masonic Temple.

Their biggest commitment is to their church, Macedonia Baptist Church in Lakewood. Elton sings in the choir, and both are members of the Deacon and Deaconess Ministries. Gloria works on the church cotillion. It was at a church meeting that they first heard about CVCJ. They felt they could use their gifts to help seniors in need.

Gloria was more involved with CVCJ at first, as Elton was still working. Given their busy schedules, they have small amounts of time that are best suited to the flexibility of offering transportation to doctor appointments or doing shopping trips. The reward is in sharing their lives, their patience and their understanding with others. They learn a great deal about others, and it gives them another way to fulfill the mission they feel God has for them to serve other people. It is an uplifting experience to share with others, according to Gloria, and to know that they have a part in relieving the stress of others.

Life is a give-and-take affair, and Gloria sums that up perfectly when she says, “For me, the glass is always half full. His is always half empty. We fill the glass up with each other’s passions. Combine us, and the glass is completely full, with our own outlooks mixed together to find the truth or the happy medium.”

Your ticket for the: The Adkinsons – Their Glass is Always Full

The Adkinsons – Their Glass is Always Full