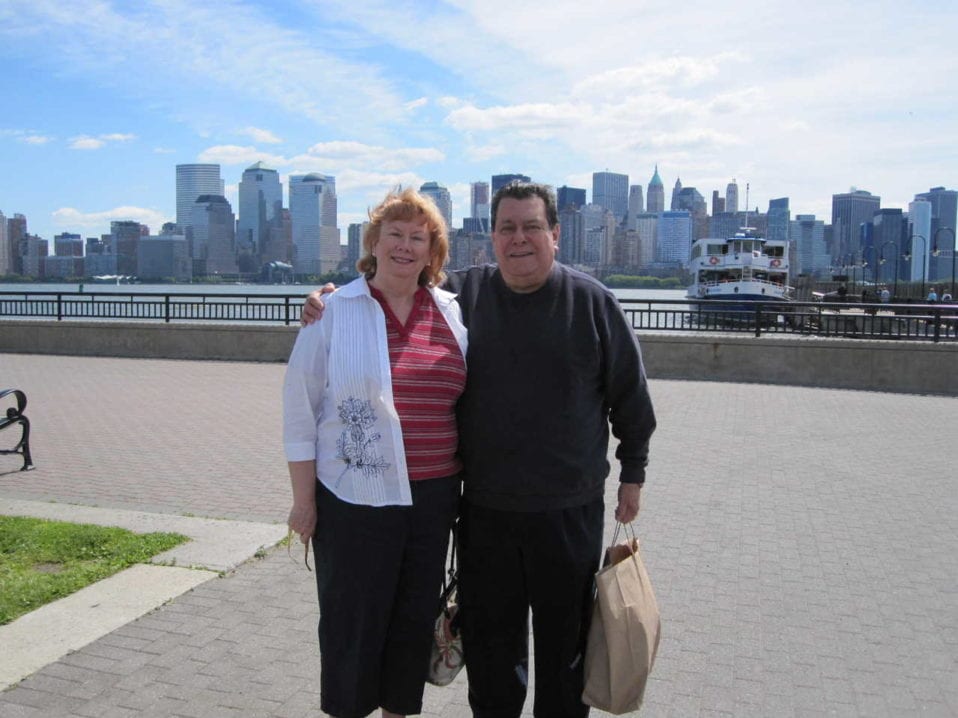 Matchmaker, Matchmaker,
Make me a match,
Find me a find,
Catch me a catch.
(from Fiddler on the Roof)

That might have been Gregory Cinque’s earworm as he consulted Compatibility Plus in the winter of 1985. Greg, 45 and a career man, wanted to meet a woman. He wasn’t interested in the bar scene, and his match wouldn’t be either. It was hard to meet people at that point in his life, unless it was through friends, and the likelihood of them being compatible was slim.

Danett (Dani) was ten years younger, and up against the same challenges. A social worker whose job took her out into the field, she wanted to meet a man with maturity and compassion.

“In those days,” Greg explains as if it was eons ago, “the agency did a thorough background check and a face-to-face interview to determine what we were looking for. They did an excellent job matching us.”

On the Sunday after Valentine’s Day of 1985, Greg and Dani met for the first time. Greg had tickets for a Dixieland jazz concert in Pluckemin, near where he lived, so he invited Danett to join him. Afterward, they had dinner at the Rusty Scupper in Princeton, near Danett’s home. What followed was a romantic courtship that lasted a year and a half.

Dani just went along with the Dixieland music, but what they really have in common, according to the couple, is that they both love the Shore. When they go to the beach, they walk along the sand for miles, soaking in the sun and the salt air.

They also enjoy fine dining, gourmet foods, and wines. They’ve always taken advantage of the many great restaurants New Jersey has to offer, and are especially fond of the places along the Delaware Canal…Italian restaurants in Chambersburg, French restaurants, The Black Swan, the Sergeantsville Inn, the many restaurants in New Hope. Often, they went to concerts, and they subscribed to the New Jersey Symphony. Theatre at McCarter or the Bucks County Playhouse, and outdoor concerts in Hunterdon County and the Clinton Museum rounded out their entertainment options.

“We had a very romantic courtship, with one great date after another,” says Greg.

In November of 1986, Greg decided the time was right to pop the question. He went to Danett’s house in Princeton to pick her up for their date. “I had the proposal all planned out. It was going to be just like in the movies. I had a ring. And then,” he laughs, “it all fell apart!” Best laid plans….

“I ended up just blurting out, ‘we’re going to get married, right?’” Danett said yes, and they went out to dinner to celebrate.

In May of 1987, Danett and Greg were married at Sacred Heart in Trenton, the oldest Catholic church in New Jersey. Danett moved into Greg’s home in Tewksbury, and they found a home site in Millstone. They didn’t have a honeymoon, as that time was spent planning the new house they were building and picking all the finishes and fixtures for the house. Meanwhile, their house in Tewksbury was sold in July of that year, but their new house wouldn’t be ready until September. During this transition, the Cinques were able to stay in the homes of friends who were spending their summers at their shore houses. They moved into their home in Millstone in September, and still live there.

These days, now retired, they spend their days at the Shore, or go to the Two River Theatre in Red Bank. They play board games, as Dani is a major fan of Monopoly. They have the Godfather version. They play chess, and still frequent restaurants, although Greg says Dani has become an expert at making Italian meals. The Cinques are members of a book club at their church, and they have themed get-togethers to discuss the books they read. They recently finished reading A Gentleman in Moscow, so their discussion was enhanced by a potluck of Russian dishes.

They also make their own wine, at the Manalapan Wine Room. They crush grapes sourced from Italy and California, and age them in their own barrel.

Greg and Dani feel their marriage is successful in large part because they were mentally mature when they met. Certainly, they loved each other then, and still do, and they are great communicators. There is nothing left unsaid, and no harbored bad feelings, so they are never mad at each other. Spirituality is also a big asset to their marriage, both in their activity in their church, and being with people with similar thoughts and beliefs. They truly have a complete understanding of each other.

Their church, St. Joseph Church in Millstone, is a member of the Freehold Clergy Association, an interfaith coalition of seven congregations that house the homeless from December through the end of March. The association gives men who have fallen on hard times food and a place to sleep seven nights a week, with each congregation taking a night. There are usually twelve or so men who are served each night, and the Cinques have been a part of this coalition for some time. It’s a natural fit for Dani’s social work background.

When the opportunity to learn about CVCJ came up through their church, Greg and Danett put their names down. They are new to CVCJ and are now looking for a new kind of match…their first assignment. They have signed up as a team to make friendly visits, grocery shop, or transport care receivers to the doctor. In the meantime, they remain active together in their church with other small service projects.

“We volunteer because we care about people and we just want to help any way we can. It would be sad if people thought nobody cares.”

Your ticket for the: Danett and Greg Cinque – The Perfect Pairing