Catherine and Bob Lauten – Mutual friends lead to a life together 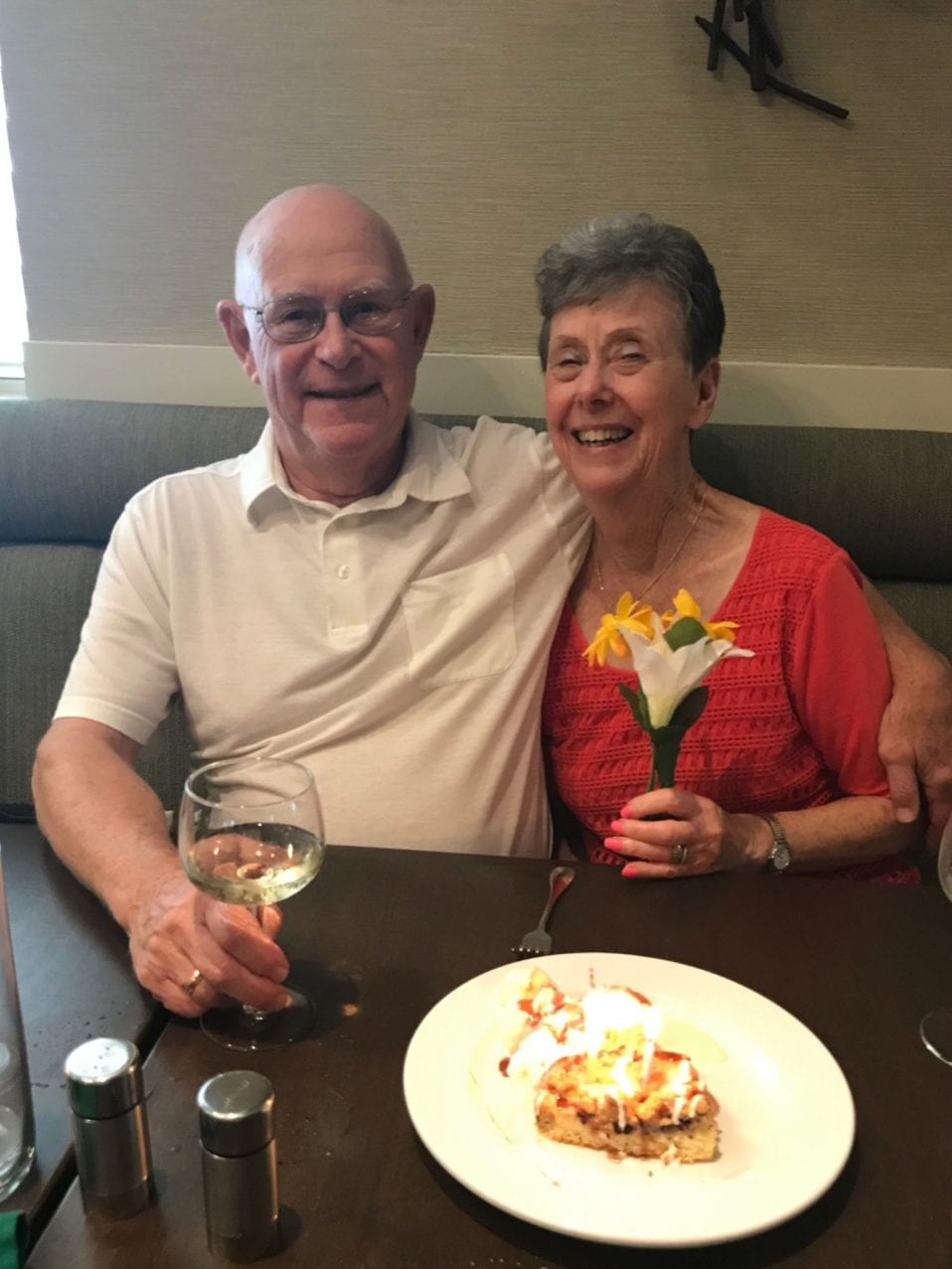 “Catherine, Mike needs a date for a party on New Year’s Eve. Will you go with him?” her friend Annette asked.

“Sure, why not?” After all, they were all friends, right? They were really a group, Annette’s brother, Franny, Mike, Joe, and Bob. Mike was a nice guy. In Jersey City in the 1950’s and ’60’s, it was common to go to places in groups.

Bob Lauten was home from Montclair State University for winter break. It was the middle of his senior year, and pretty soon, he and his friends would be graduating. Who knew where people were going to end up? This could be the last time for a while that he got together with his neighborhood buddies from Jersey City before they all got jobs and some of them moved away. A New Year’s party was the perfect place for their “last hurrah” before graduation.

Bob’s friends, Franny, Joe and Mike were at the party and it wasn’t long before Bob was introduced to Mike’s date, a pretty girl named Catherine. For two weeks afterward, he could not stop thinking about her, so he finally asked Franny for her phone number.

Since Bob was back at Montclair State by then, he invited Catherine to a play at the college. They doubled dated with another couple with whom they also had a mutual connection. After that the relationship was up and running. Bob graduated from Montclair State later that year and joined the National Guard.

With his degree in physical education, Bob soon secured a job teaching in Jersey City for a term, before being hired to teach PE at a North Bergen Grammar School. Catherine went to secretarial school in New York City and got a job with Electronic Industries Association.

The Lautens dated for two and a half years before getting married, and recently celebrated their fifty-fifth anniversary. Catherine quit work when she gave birth to her first child. They have four children, and she stayed home until the youngest was in middle school. Then she took a part-time job working for Catholic Family and Community Services. After five years there she took temp work, eventually landing at William Paterson University.

Bob changed jobs and began working at the North Jersey Training School in Totowa, a state residential facility for the developmentally disabled. Subsequently, the name was changed to the North Jersey Developmental Center. Bob worked there for over thirty years, eventually becoming Assistant Superintendent. The state eventually closed the center in 2014.

The Lautens moved to Totowa and raised their family there. With four active children the Lautens became fixtures in the Totowa community. Catherine did a lot of volunteering at St. James Elementary where their children attended school. Bob coached sports teams for the Totowa PAL. One son was a Boy Scout. Everything was centered around their family in those years.

As the kids got older, Catherine turned her attention to other volunteering opportunities. She did some food shopping for a couple in Totowa and for a friend who had macular degeneration and could no longer drive.

Shortly after Bob retired from NJDT in 1999 the Lautens moved to Toms River. They immediately found St. Joseph’s Church and went to an orientation the church has for new members. One thing that stood out was that Monsignor Flynn expected all parishioners to do some type of volunteer service. Caregiver Volunteers of Central Jersey was a perfect fit since Catherine was already providing the services CVCJ offers. When Josephine, the coordinator for St. Joseph’s, called them they signed up for a training meeting. That was in 2000 and the Lautens have been with CVCJ ever since.

“Helping others is just what you do,” remarks Catherine. “We are blessed, we have our health, and the ability to reach out and help others who really need it. Everybody should give of themselves to help where they can.”

The Lautens are multitaskers and their volunteering doesn’t end with CVCJ. Catherine volunteers at St. Joseph’s food pantry Tuesday afternoon and Bob is a sub. Bob volunteers at the Eucharistic Chapel at St. Joseph’s. They are a part of their church’s Interfaith Hospitality program for people who have lost their homes and need a place to stay while they get back on their feet. They are also involved in Sunday Supper at St. Joseph’s. Once a month Catherine picks up the voice message for the St. Vincent de Paul Society and calls people back to get their information. In their community, Catherine assists with preparations for the annual Head Start Christmas party.

Volunteering together helps the Lautens stay connected, and being best friends also helps. “We are here for each other and love each other, but we also need our space,” Bob explains. “We have different interests, but we don’t hold each other back from doing the things we love. We have our differences and we both feel strongly about things, but we are supportive of having our own time to do the things we like, independently of each other.”

Bob gardens and is a bird watcher. Catherine likes birds and flowers, but she doesn’t need to know everything about them. She leaves it to Bob to point out noteworthy nature. She likes to read and go to lunch with her lady friends. One thing they do both enjoy is ice hockey, and they are big New Jersey Devils fans. Together they walk every day, attend plays and concerts at Ocean County College, Algonquin, Surflight and others. They also enjoy traveling, especially out west where three of their children live. In 1947, Bob’s father built a little summer place in the Berkshire Mountains of western Massachusetts and they still go there every summer. They soak up the laid-back lifestyle, the theatre, and the music festivals.

The Lautens speak fondly of the many people they have served in the past eighteen years through CVCJ: George, who was surviving on half a kidney due to cancer, Rose who had fallen in her garden, and others. They value the friendships they make with their care receivers, and Catherine makes sure to spend some time helping put groceries away and catching up on the news. The “payoff” is knowing they are doing some good.

Your ticket for the: Catherine and Bob Lauten – Mutual friends lead to a life together

Catherine and Bob Lauten – Mutual friends lead to a life together